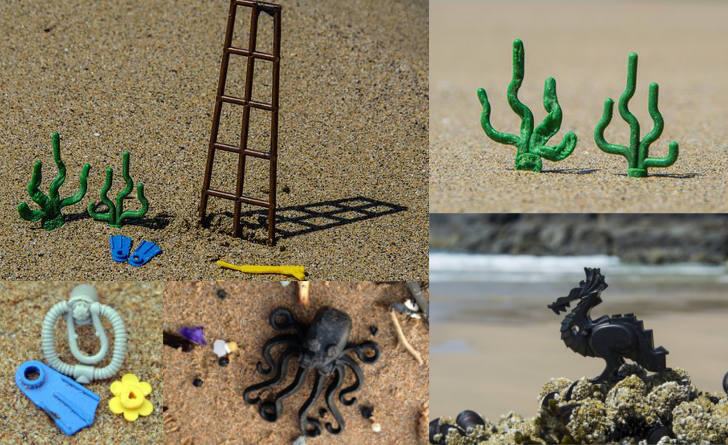 In 1997 Container Ship ‘Tokio Express’ was hit by freak wave described by the Captain as a ‘once in 100 year phenomenon’. The wave caused the ship to tilt between 40 and 60 degrees one way then the other loosing 62 containers overboard approximately 20 miles off of Lands End.

One of these containers was filled with 4.8 million Lego pieces, which rather than remaining at the bottom of the sea have been washing up on Cornish beaches ever since. By shear coincidence, many of the Lego pieces are nautically themed.

Tracey Williams from Newquay has been finding Lego pieces on the local beaches since the 90’s, and runs a facebook page documenting the discoveries, the furthest away being a flipper found in Melbourne.

‘These days the holy grail is an octopus or a dragon. I only know of three octopuses being found, and one was by me, in a cave in Challaborough, Devon. It’s quite competitive. If you heard that your neighbour had found a green dragon, you’d want to go out and find one yourself’.

US Oceanographer Curtis Ebbesmeyer has been tracing the Lego story since the spill. Ebbesmeyer said ‘those pieces could have drifted 62,000 miles. It’s 24,000 miles around the equator, meaning they could be on any beach on earth. Theoretically, the pieces of Lego could keep going around the ocean for centuries.

It takes three years for sea debris to cross the Atlantic ocean, from Land’s End to Florida. Undoubtedly some Lego has crossed and it’s most likely some has gone around the world.

All photos courtesy of Tracey Williams/Lego Lost At Sea.